Indian Workers Stand Up To Globalisation

Today the solidarity of the working class reverberated throughout India, when millions of workforce—not prejudiced by ideology, class or political linkages—came together, bringing the country almost to a standstill, to protest against the anti-working class attitude of the ruling government. The 14th general strike (since 1991) established that the working people of the country en masse raised their voice of protest, warning the Government about its indifference to the burning issues affecting the lives and livelihoods of the workers, and its anti-people economic policy regime. The call for strike was given by all the central trade unions in the country and was endorsed by almost all the major independent national federations of employees and workers. According to a joint statement issued by the unions (BMS, INTUC, AITUC, HMS, CITU, AIUTUC, AICCTU, UTUC, TUCC, LPF, SEWA), “Around 10 crore workers, from both the organized and unorganized sectors, took part in this strike across the country.”

“The strike was bigger than the earlier one, with the participation of both organized and unorganized sector workers. In many states it was a bandh-like situation because the workers from sectors such as transport, port and dock, and posts struck work totally,” says Tapan Sen, General Secretary, CITU. “The clarion call given by the central trade unions as well as the independent industrial federations was responded to in an unprecedented manner, making the February 28th strike a historic event in annals of the Indian working class movement,” states Comrade Mahadevan, Deputy General Secretary of AITUC. “The demands that we have put forward are genuine and so the workers motivated themselves to take part actively in the strike,” says Comrade D.L. Sachdeva, the AITUC National Secretary. “In Kerala, even the journalists came together in support of the cause. Shops and educational institutions were closed in support of the strike,” says T.P. Ramakrishnan, State Secretary, CITU. “All the Defence civilian workers working in ordnance factories, DRDO labs and other defence installations participated in the strike,” says Raju, National Secretary, INTUC. A release issued by the All India Bank Employees Federation stated that the employees held processions, rallies, demonstrations, etc., to mark the strike. In spite of various provocations from the state government, the strike was complete. Five union leaders and activists were arrested by the police in Kolkata.

GLOBALIZATION IN INDIA from Shashank Singh

Delhi witnessed demonstrations by the workers on strike near ITO, blocking the traffic for an hour. Industrial areas such as Mayapuri, South Delhi, Okhla, Mangolpuri, Kirti Nagar and Azadpur were closed due to the strike. Auto rickshaws were off the roads. Of 125 flights from Delhi, only 30 flights could take off; due to the strike in the oil sector in 146 installations, airports in the northern region were completely affected.

“The miseries of the common people and workers are increasing day by day. Exploitation of the workers is on the increase. Nearly 40 lakh workers have lost their jobs in recent years. Whereas employers are being bailed out, workers interests are being sold out. Labour laws are being violated by employers and the government is openly supporting employers. The public sector is being disinvested and privatized,” says C.H. Venkatachalam, General Secretary, All India Bank Employees Federation.

The General Strike by the workers en masse visibly impacted almost all the sectors of the economy, including coal, steel, petroleum, telecom, defence, banks, insurance, electricity, transport, port and dock, anganwadis, construction, brick-kilns and beedi. This is a fitting reply to the utter neglect and insensitivity of the government to the problems and miseries of crores of the working masses who keep the country’s economy running. This is also a signal that the working people and their unions will, in no way, accept such indifference and neglect lying down; instead they will take their struggle to a higher pitch if their basic demands are not addressed by the government through concrete remedial action.

Demands of the Countrywide General Strike

According to the unions, almost all the strategic sectors of the economy as well as unorganized sector participated in the strike. These include: 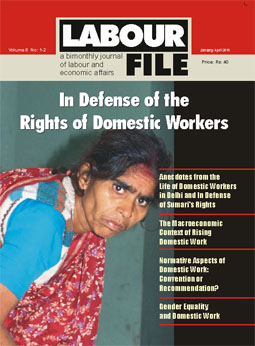