The State of Labour 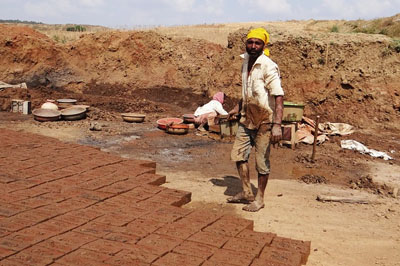 What we are witnessing now is a move towards forced informalisation of labour. New entrants to the labour force cannot hope to get secure employment. Those with permanent jobs are being pushed into insecure, low-paid jobs in the unorganised sector. This can be seen from the growing trend in outsourcing of manufacture from the large-scale sector to the small and medium sector. In recent times, we have seen the gradual shrinking of employment and production in the Hindustan Unilever (HU) factory at Sewri in Mumbai to the total closure of the factory. At the same time, we see HU products increasing manifold. Its production has shifted from the large factories to small-scale industries located in industrial estates in different parts of the country. This is the main reason for the de-industrialisation of most of the industrial centres such as Mumbai, Ahmedabad, Kolkata, etc.

The advantage that HU and other companies engaged in manufacturing have is that most of the laws for protecting employment are not  enforced in these small-scale industries. Moreover, as an additional bonus, these industries are exempt from paying taxes for the first five years. After this initial period, the company can fold up its activities and move on to another district or state where it can start afresh with new tax exemptions.

The government has tried to make matters easier for these buccaneer industrialists by promising to change the existing laws. At present the Industrial Disputes Act in its chapter on the closure of industries (Chapter VB) lays down that any factory employing 100 or more workers can close operations only after permission is given by the labour department of the state. The objective is obviously to ensure that workers get their legitimate dues if closure is necessary. Employers have been protesting about this provision stating that 100 is too small a number. In 1998, the Shiv Sena-BJP government in Maharashtra had proposed that the minimum number of workers should be increased to 300. At that time, it was found that if such an amendment is accepted, 78 per cent of the factories in the state would fall outside the ambit of Chapter VB of the Act.

The Finance Minister, Jaswant Singh of the BJP-led NDA government was even more supportive of employers. In his budget speech of 2001, he directed the Labour ministry to raise the minimum number of workers in a factory that could close its operations without permission of the Labour department to 1,000. Following this, over 90 per cent of the factories in the country would not come under the provisions of the Act.

In August 2006, the Planning Commission appointed a Working Group on Labour Laws and other Labour Regulations. The group submitted its report in 2007. One of its recommendations suggests an ‘amendment in the ID Act of 1947 by raising the number filter from 100 to 300 for applicability of chapter VB’.

The facts presented above indicate that though there may be major ‘ideological’ differences between the NDA and the UPA governments, their views are similar as far as labour is concerned. Both would like to make employment more ‘flexible’ for the benefit of employers. The difference is that when the previous Finance Minister wanted to raise the number to 1,000 there were strong protests from all trade unions, including the Bharatiya Mazdur Sangh of the RSS. The government finally did not amend the Act. One hopes that trade unions will launch similar protests to the suggestion of the Planning Commission.

Condition of the Unorganised Sector

The second National Commission on Labour had suggested that there should be an umbrella legislation to protect the working conditions in the unorganised sector and for social security. The NDA government took scant notice of this suggestion. The UPA government had promised that it would have a comprehensive law, covering these aspects. However, it soon abandoned the idea of regulating working conditions in the unorganised sector. The National Commission for Enterprises in the Unorganised Sector (NCEUS) was asked to draft a legislation on social security. This bill is a whittled down version of the earlier promises. The government has decided to reduce its scope even further, possibly to cut down on expenditure. What it proposes to introduce in parliament will include only provisions for the insurance of these unprotected workers. However, even this has not been fulfilled so far. Before each session of parliament, the government promises to introduce the bill, but somehow this does not happen. The term of the present one is coming to an end and it is unlikely that it will render anything more than lip service for the unorganised sector. There are other Acts too such as the one on regulating street vending that are lying in cold storage. NCEUS has already drafted the bill but government is dilly-dallying about introducing it in parliament. Hence, whereas labour in the unorganised sector is increasing rapidly, the government is making no attempt to provide any protection or security to them.

A major blow to the labour movement has come recently in the budget speech of the Finance Minister for the year (2008-09). He has directed that there should be an amendment to the Factories Act to increase the working day from 8 hours to 10 hours. This should come as a shock to trade unions in any part of the civilised world. The International Labour Organisation has been stressing decent work, which includes better working time. In most European countries, there are moves to reduce working time. In fact, Germany, which is the most industrialised country in Europe, has reduced the working week from 40 to 36 hours. Yet, here we are trying to increase the working week from 48 to 60 hours. This is in blatant disregard to international norms governing decent work.

The objective is very clear. Workers in export-oriented industries such as garments will produce more to help in the country’s export earnings. It will make the industries more competitive in comparison with other developing countries such as Bangladesh and Sri Lanka. Unorganised labour in these factories is overwhelmingly female. They get low pay because of their insecure status and lack of legal protection. They will now have to work even longer under the same oppressive conditions. A longer working day means longer control of the employer over workers’ lives. It also means lesser time for the worker to partake in trade union activities. But the more important question is: if the 10-hour working day becomes a reality, should we celebrate May Day any longer? After all, the protesting workers at the hay market in Chicago had laid down their lives fighting for an eight-hour day. We, on the other hand, got the eight-hour day through the Factories Act of 1948. But, after 60 years, we have decided that the worker needs to toil more to earn her/his bare necessities. It needs to be seen if the working class will rise to fight to restore their rights.
S. K. Bhowmik is Professor of Labour Studies, Tata Institute of Social Sciences, Mumbai