The Dirty Secret of the Rising Middle Class

The United Nations Convention on the Rights of the Child (UNCRC) will soon be celebrating its twentieth year of formulation. The Convention grants to all children (defined as persons up to 18 years of age) the rights to survival, development, protection and participation, and places on signatory governments the responsibility of ensuring the same on a priority basis. The Government of India signed the Convention in 1992. Yet, at least 40 million children, by most conservative estimates, remain out of school and are in the labour force.

Whereas the more publicised forms of child labour include children in extremely hazardous industries such as in the manufacture of fire crackers and in mining, there are millions more slaving in fields and homes, who are exploited, but have not yet been acknowledged by an increasingly material and upwardly-aspiring society. Domestic child labour is perhaps the most invisible of these. 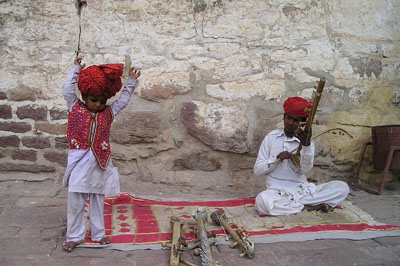 The Child Labour (Prohibition and Regulation) Act (CLPRA) of 1986 lists hazardous industries in which the employment of children (below 14) is completely banned; in other sectors, it is sought to be `regulated`.  In October 2006, domestic labour and child labour in the hospitality industry were added to hazardous category, banning employment of children. That this ban has not had much effect is obvious from the fact that most middle class people know at least one person, who employs a child in the home, and frequent, at least once a week, a restaurant that employs children.

There are no substantive studies to give us a true picture of the number of children below 18 in full-time employment in homes; and to get this true picture is extremely difficult. Save the Children has recently estimated that around 50,000 children below 14 work in major cities such as Hyderabad and Kolkata, and at least twice that number in Delhi.

When employers have been questioned about the reasons for employing children, the single fact that emerges is that it is cheap. With the increasing unionisation, the demands of adults in domestic labour have been steadily increasing. At the same time, with more middle class women moving out to work, the need for domestic labour is also on the rise. The newly affluent classes have adopted a lifestyle, in which a whole army of servants is needed to support it. Employing children at low wages is, therefore, an easier option, without having to make any promises and without having to answer to any union.

Added to this is the fact that many employers think that they are giving the child, who works for them, a better environment than the one she or he comes from. The fact that they are also effectively cutting the child off from any possibility of upward mobility is played down or unrecognised, giving the employer-employee relationship a patina of philanthropy. Children, who work in homes and are in contact with local NGOs, report payment as low as Rs 300 per month for a ten-hour working day, seven days a week. Apart from this is the fact that more than half report severe beatings and, frequently, sexual abuse.

In many cases, children have been brought from the backward districts of each state to the more developed towns and cities, bringing in an aspect of human trafficking and bondage. This also cuts the children off from any possible support system, effectively making them totally powerless and vulnerable.

The most important reason for people to employ children as domestic servants is that they are cheap and pliant labour. No argument of philanthropy holds any ground when scrutinised-it is plain and simple human greed. No labour laws on wages, leave or any other benefits apply here, and neither are they demanded because children are isolated, unorganised and powerless. Stringent labour standards for domestic work, pushed by unions of domestic workers, would have an indirect effect on child labour in the sector. This would be effective in discouraging the employment of children because it would no longer be worth an employer`s while to employ a child if he had to pay a minimum wage and benefits. Labour standards in the sector would also ensure that the mothers, who are also usually in domestic work, get a fair wage, freeing children to get an education and a childhood.

However, child labour activists are loathe to demand labour standards, specifically for children. Any discussion or negotiation on this would, they feel, mean an acceptance of child labour. Given that all wage labour is physically and mentally harmful to the child and compromises her future, it is felt that in no circumstances should children be employed, even with adequate wages and working conditions. In fact, most campaigners agree that the CLPRA should be amended and made the Child Labour Prohibition Act, removing the aspect of regulation and calling for a total ban on child labour.

Another interesting aspect is that every time an estimate is made of the number of children working as wage or bonded labourers in India, the figures match the official unemployment figures for adults. Perhaps unions need to get involved in the campaign against child labour on this count alone! 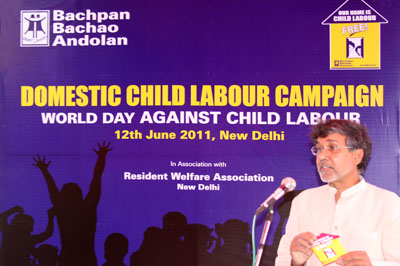 The experience of NGOs and campaigns in releasing children from child labour in homes have been mixed. Whereas in most cities in India, a task force for child labour has been set up by the labour department, the actual process of `rescue and rehabilitation` has many loopholes. At present, it is extremely dependent on NGOs to play the crucial role of supporting a child until he or she can be reunited with the family and keeping the regular support system going even for some years after. While more and more children are being rescued, the systems for rehabilitation are also falling into place.

The question, therefore, is, “If poverty drove the child into labour, what will stop her/him from returning?” There are no easy answers. Food security, health care and employment for adults; free quality education with a vocational training component in the later years, mid-day meals in schools, and residential facilities for children without families, are some of the essential supporting mechanisms.

However, the major push to eradicate child labour in homes has to come from adult domestic workers. The information regarding the existence of banned child labour in homes can only come from adults working in the sector. So also, the demand for employment of adults and the concomitant demand for decent labour conditions will work towards freeing children from one of the worst forms of exploitation.